The Three Flags of the United States of America – You have been warned!

The THREE Flags of the United States of America —

You have been warned!

PREFACE: One commentator stated that my essay was all myth, especially about the U.S. Civil Flag of Peacetime and the fact that it had VERTICAL stripes – as opposed to horizontal stripes on “Old Glory”. I will now present PROOF of my statements; and thus display the arrogant ignorance of that commentator.

Nathaniel Hawthorne’s The Scarlet Letter, published in 1850 before the War Between The States has this description of the U.S. Civil Flag in the introduction, “The Custom House” —

Start of Quote from Nathaniel Hawthorne’s The Scarlet Letter

“. . . Here, with a view from its front windows adown this not very enlivening prospect, and thence across the harbour, stands a spacious edifice of brick. From the loftiest point of its roof, during precisely three and a half hours of each forenoon, floats or droops, in breeze or calm, the banner of the republic; but with the thirteen stripes turned VERTICALLY, instead of horizontally, and thus indicating that a civil, and not a military, post of Uncle Sam’s government is here established. Its front is ornamented with a portico of half-a-dozen wooden pillars, supporting a balcony, beneath which a flight of wide granite steps descends towards the street Over the entrance hovers an enormous specimen of the American eagle, with outspread wings, a shield before her breast, and, if I recollect aright, a bunch of intermingled thunder- bolts and barbed arrows in each claw. With the customary infirmity of temper that characterizes this unhappy fowl, she appears by the fierceness of her beak and eye, and the general truculency of her attitude, to threaten mischief to the inoffensive community; and especially to warn all citizens careful of their safety against intruding on the premises which she overshadows with her wings. Nevertheless, vixenly as she looks, many people are seeking at this very moment to shelter themselves under the wing of the federal eagle; imagining, I presume, that her bosom has all the softness and snugness of an eiderdown pillow. But she has no great tenderness even in her best of moods, and, sooner or later — oftener soon than late — is apt to fling off her nestlings with a scratch of her claw, a dab of her beak, or a rankling wound from her barbed arrows.”

End of Quote by Nathaniel Hawthorne in The Scarlet Letter

Before 1940, no U.S. flag, civil or military, flew within the forty-eight states except in federal settings and installations. Only state flags did. Since the 1935 institution of Social Security and the Buck Act of 1940, 4 U.S.C.S. Ch. 4 Sec. 104-113, by clever legal maneuvers the feds have entirely circumvented the U.S. Constitution, and have overlaid federal territorial jurisdiction on the sovereign States, bringing them under the admiralty/military jurisdiction of Law Merchant, the Uniform Commercial Code (UCC), the law of Creditors and Debtors.

Since then the U.S. military flag appears beside, or in place of, the state flags in nearly all locations within the states. All of the state courts and even the municipal ones now openly display it. In the last half century they have more openly declared the military/admiralty law jurisdiction with the addition of the gold fringe to the flag, the military flag of the Commander-in-Chief of the Armed Forces.

Such has been the path that has brought us under the Law of the Military Flag. This should have raised serious questions from many citizens long ago, but we’ve been educated to listen and believe what we are told, not to ask questions, or think for ourselves and search for the truth.

The next time you walk into a courtroom or other government building in America, take notice of the American flag. In most instances the flag will be the so-called “Stars-and-Stripes” flag with gold-fringe. Just what does this gold-fringe mean? If you think the golf-fringe is merely a decorative addition, then you need to do some research on the “Law of the Flag” and international maritime law.

First, the REAL “United States Civil Flag of Peacetime” is NOT the familiar “stars-and-stripes” flag, either with or without the gold-fringe. The REAL “U.S. Civil Flag of Peacetime” contains blue stars on a white background, with vertical, alternating red and white stripes. This flag signifies that that the Common Law (the “Law of the Land”) and the Constitution remain in effect. 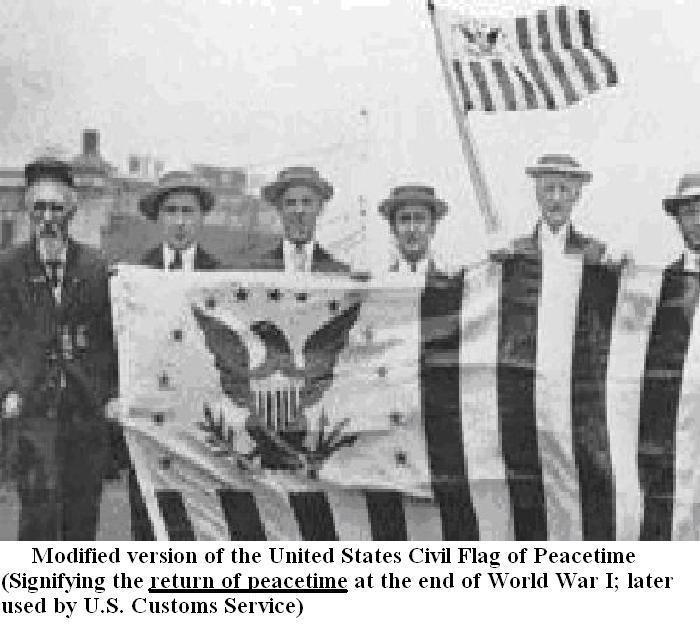 Before 1940, NO United States flag, either civil or military, routinely flew over state government and private buildings within the forty-eight states, except in federal non-military settings and on federal military installations. Only individual STATE flags normally flew over most non-federal government and private buildings in America. And within the various states, when the “U.S. Civil Flag of Peacetime” was flown, it traditionally flew SOLELY over federal, non-military buildings, such as post offices and federal non-military buildings within the states.

The familiar “star and stripes” flag is actually the “U.S. Military Flag of Peacetime”, in which the Common Law (the “Law of the Land”) and the Constitution remain in effect for CIVILIANS (non-military personnel) within the various states, except for U.S. MILITARY installations and U.S. Territories where military law is in effect., as well as U.S. ships as the ship’s Ensign to identify its nationality under Maritime Law.

It was traditionally flown over U.S. military buildings during peacetime and federal buildings within the territories (which operate under martial law) . Thus, in the photo below we see two flags displayed outside a U.S. Customs house in Alaska in 1997. The bottom U.S. Customs flag (a modified U.S. CIVIL Flag of Peacetime) signifies to American civilians that the RIGHTS guaranteed by the U.S. Constitution remain in effect. The top flag (the U.S. MILITARY Flag of Peacetime) signifies to foreigners entering the U.S. that they may be subject to administrative, military law of peacetime with limited or no protections under the Constitution.

On the seas (the oceans and navigable rivers) the law is very different: it is variously called “Maritime Law”, “Law Merchant”, “Admiralty Law” and “Commercial Law” in which the Common Law and the Constitution do NOT apply.  It is administrative in nature, rather than judicial. In the early and mid-1900’s the Common Law in America was slowly replaced by statutory commercial law – in fact, the entire U.S. Code was replaced by the Uniform Commercial Code (called the UCC), thereby divorcing all U.S. statutory law from the Common Law and tying it instead to Maritime-Admiralty-Commercial Law in which you have NO rights; only privileges granted to you by the government. (Since the 1935 institution of Social Security and the Buck Act of 1940, 4 U.S.C.S. Ch. 4 Sec. 104-113,  the federal government has  entirely circumvented the U.S. Constitution, and has overlaid federal territorial jurisdiction on the sovereign States, bringing them under the admiralty/military jurisdiction of Law Merchant, the Uniform Commercial Code (UCC), the law of Creditors and Debtors.) Under the international Law of the Flag, the gold-fringed U.S. Military flag signifies that one is entering maritime-admiralty jurisdiction equivalent to military law (martial law) during wartime.

To illustrate the jurisdictional implications signified by the various flags, under Common Law a “trial by jury” is a RIGHT and the jury’s verdict is absolute and final. Under Commercial Law, a “jury trial” (NOT a “trial by jury”) is a PRIVILEGE, which may – or may not – be granted to you. And even if you are granted a jury trial, the jury’s verdict is considered to be ADVISORY only upon the judge – who (like the captain of a ship) can do whatever he wants to you. Just try and get a jury trial to contest a traffic ticket !!!!  Under Common Law you would be guaranteed a trial by jury before ANY fine or sentence could be imposed. Under Commercial Law you are NOT guaranteed a jury trial – only a “bench trial” before an administrative judge; NOT a judge sitting in a true judicial capacity. Indeed, the very word “bench” is derived from “BANK”, since in ancient Rome and later Britain, the bankers sat on a bench behind a platform or table. So the judge, acting in an administrative, non-judicial capacity, sits on the “bench” for the bank to collect money from you (the “debtor”) for the government corporation (the “creditor”). Commercial courts deal only in commerce with creditors and debtors!  This administrator-judge acts as both judge and jury, NOT to decide if you (the “debtor”) are guilty or innocent, but rather to consider HOW MUCH you need to pay the “creditor” (the government as a corporation).

Therefore, when the “stars and stripes” flag has GOLD-FRINGE, it is the “U.S. Military Flag of War” signifying martial law or territorial law or maritime-admiralty/commercial law – meaning that Common Law rights and the U.S. Constitution are SUSPENDED or VOID. As noted above, it was traditionally flown over U.S. military buildings ONLY during wartime. Today this flag is now seen most commonly in U.S. COURTS and in the offices of POLITICIANS !!!!

That is why, if you dare to mention your Common Law or Constitutional rights in a COURT ROOM, the judge may tell you to “sit down and shut up!” Unbeknownst to you – and perhaps even your attorney – you are in a MILITARY-ADMIRALTY court of wartime where Common Law and the Constitution do NOT apply! That is why you can be fined or imprisoned by a judge’s “summary judgment”, without a “trial by jury”!  Surprise !!!!! Further, as noted above, if you happen to be granted the “privilege” of a “jury trial”, that verdict (whether guilty or not-guilty) is only “advisory” upon the court – the judge can rule as he wishes.

So, if you are ever in COURT – or ANY other government building – and see a gold-fringed flag, you have been WARNED !!! Under the international “Law of the Flag”, the gold-fringed U.S. military flag tells you that, should you decide to enter that courtroom, you have legally “boarded” a maritime vessel where ONLY Admiralty-Commercial Law applies; and that you have agreed to WAIVE your Common Law rights, as well as all protections afforded by the Constitution!!!

NOTE: In a courtroom – even if seen only on TV – did you ever notice the RAILING that separates the judge, prosecutor and defendant from the audience? That this railing closely resembles the railing of an old-style sailing ship is NOT an accident: by crossing through it, you leave behind the “law of the land” and board a vessel operating under the “law of the sea” or Commercial-Maritime Law. The gold-fringed flag near the judge’s bench serves as your second warning that, under the international Law of the Flag, you are about to cross over into the jurisdiction of international maritime-admiralty law.